Life got so busy as soon as Susbaby arrived I never got the chance to formally introduce him on here!

Adam Orson Susman was born Thursday, April 9, 2015 at Methodist Women's Hospital.  He was six pounds, six ounces and 19 inches long.  He had 10 fingers and 10 toes (I counted twice). 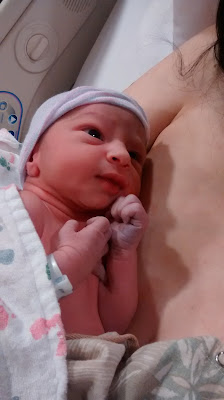 Everything started and ended simply enough, but boy were emotions all over the place in between.  We hadn't told anyone but at Shoshy's OB appointment a week prior the doctor scheduled her to be induced.  So Wednesday night we went out to dinner and then to bed (in a slight state of disbelief).  Woke up Thursday, showered, ate breakfast, and went to the hospital to have a baby. You know, a normal Thursday. :)  Checked in, got settled in the room and starting doing all the paperwork and the nurse's questions and everything like that.  Around 8am they started the Pitocin to start labor and around 9 the doctor came in to break her water.  I got to play nurse and hand him instruments (okay, I held the package that a pointy stick was in and let him get it when he asked, but I'm still counting it).  And that's when our peaceful morning abruptly ended.

A baby's heartrate is supposed to be somewhere between 110 to 160 (ish) beats per minute.  Susbaby (he was still Susbaby) was baselining around 108, so noone was worried, but was aware of it.  Back to the story.

About a minute and a half, maybe two minutes after breaking the water, Susbaby's heartrate dropped.  Like, dropped.  By the time I looked at the monitor, it had recovered back up to the 50s.  Apparently it had dropped all the way into the 30s.  Suddenly the room was filling with nurses and our normally genial doctor switched into Commander.  Everyone was super calm, including somehow Shoshy.  I think I probably had the most adrenaline pumping of anyone in the room.  Dr. Basset asked with OR was available and to tell them to get ready.  Shoshy's bed was unplugged from the wall; her IVs were token off the stand; someone gave her an oxygen mask; someone gave me a bundle of scrubs and said I'd still need to get a hat and boots (I got the hat, but never go the boots).  Probably three minutes later we're going down the hall; I'm hustling to catch up to hold Shoshy's hand after getting held back in a doorway.  She tells me to call her mom and get her up here and to post on Facebook for everyone to start to daven for her.  We've in the OR and the anesthesiologist is getting ready and going over his questions for her. She hadn't gotten an epidural yet (we were still hours away from that) so she was going to get knocked out.  OR nurses were counting scalpels and other tools at a back table.  Susbaby's heartrate was coming back up steadily and finally was back over 100.  The room continued to fill with more people - waiting for an instruction.  They got an instruction, but not the one they expected: we weren't going to do a C-Section, but were going to stay in the OR for an hour for observation.  Someone said the room was booked for another procedure, but that was just going to have be delayed.  And so, after an hour that simultaneously lasted forever and flew by, we left the OR the same way we came in - sans child - and Shoshy's nurse started the Pitocin again to get this whole labor thing started again.

In Shoshy's own words, from then on, labor was "easy."  The plan was to get the epidural around 4cm dialited but when that time came, she didn't even think it was needed.  The nurse encouraged her too though, because if the pain got worse and she couldn't stay still it would be too hard to give it to her later.  Okay, so a bit later the anesthesiologist came in to do his thing.  A couple hours later her leg starts to hurt and the nurse is working to adjust her position so the medicine works better.  Dr. Bassett happened to walk in to check how dialated she is.  We're expecting 7cm, maybe 8.  Nope, she's fully at 10 and ready to start pushing.  He'll be back in an hour to see how it's going.  Shoshy starts to push with me, her mom, and the nurse all helping.  She's doing a great job, pushing hard and steady when she's told to and resting and breathing well when she's supposed to.  After about 30 minutes the nurse has to call the doctor back because she's ready to deliver, so he came hustling back a bit sooner than expected and Shoshy had to hold back to keep from delivering before he arrived (we're only talking a few minutes, thankfully).  Six weeks of birthing classes taught only one useful thing, and the six weeks were worth every minute: if you pretend you're blowing out a candle, you can't push.  So blow she did.

As soon as Dr. Bassett arrived Shoshy started pushing again, following his specific directions.  Push.  Again.  A half push.  Stop!  A quarter push.  Push.  Again.  Stop!  Shoshy did what she does best and followed the expert's directions perfectly and with an awesome first cry Adam was born into the world less than 12 hours after arriving at the hospital! 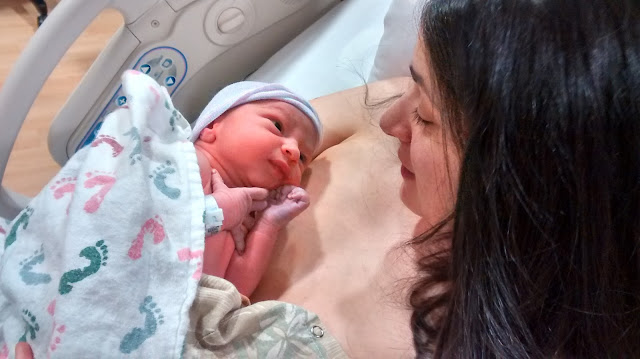 Every now and I then I get to give Adam a bottle before bed. I love it. It gives me a partial chance to experience what Shoshy gets to every day - the amazingness of feeding your baby. I'd given a few bottles to friends' kids before and it was kind of fun, but the feeling of nurishing your own is incomparable. And I know what I experience through plastic and silicon is only a sliver of how amazing it must be for a mom to do straight from her breast.

Further - and I don't think I've ever been unappreciative of how much hard work breastfeeding is - giving Adam a bottle reinforces how much work Shoshy (and all moms!) does every time she feeds him. I was so preoccupied tonight on making sure he kept a good latch on the bottle that I forgot to keep the bottle more horizontal so it didn't just pour down his throat. I can hear so many more noises she's always talking about so much more clearly, and she knows what they all mean! I just hear "noises", and only when I paid extra attention to listen to them, at which point I forgot to focus on his wide latch, and so on. And all of this is while I can at least see how much he's eating!

So to Shoshy - and all breastfeeding moms - I'm massively impressed with how well you can do it all. I always think it, I just don't always tell you.

Email ThisBlogThis!Share to TwitterShare to FacebookShare to Pinterest
Labels: nursing

Hey, so getting closer to the big day.  Shoshy's a few days from officially being full-term, which is pretty much both awesome and crazy.  Yesterday I saw her sitting on the couch, and for the first time her belly actually looked baby-sized.  Like, there can actually be a baby in there.  Crazy.  Thankfully, she's finally feeling pretty good, minus the feeling huge, clumsy, continually peeing, pees when she laughs, can't carry the laundry basket upstairs, pees all the time, has more pillows in the bed than actually fit feeling.
We're up to weekly doctor appointments and according to the doctor, she's still going to be pregnant next week.
In other news, bags are getting packed and the nursery's looking good!  We've only found the cats in the bassinet once, which is shocking.
Posted by Scott at 6:46 PM No comments:

Orange juice and pineapple have been out for weeks since the heartburn kicked in.  Now I'm regularly buying:

Email ThisBlogThis!Share to TwitterShare to FacebookShare to Pinterest
Labels: food

The past few weeks have brought much improved health!  Shoshy's up and about and almost (relatively speaking) back to normal.  Still taking things slow and not overexerting herself (ie, walking through Target's still a challenge), but she's able to drive, run errands, sit downstairs, go to Target, etc.

Really, I knew she was feeling better when I came home one day and saw the vacuum cleaner out and a to-do list waiting for me. :)

We have quite a busy time ahead of us!  We're going to Vegas soon for a belated anniversary trip!  We'd been waiting for her to feel well enough, so here we go!  Then St. Louis for Thanksgiving, then off to Universal Orlando in January before settling down for the home stretch. :)

We've been to NFM and Babies R Us to look for cribs and car seats and think we have some of that figured out.  Now we're just talking about names - which would be easier if we knew a gender.  So far George and Mcgillicutty are out for boy names as well as Georgina and Mcgillicutty for a girl.  We're narrowing it down. :)  Actually, we pretty easily agreed on an early fore-runner for a girl's name, but that's about it so far.

And Shoshy has a little bit of a bump!!!  Basically from Friday night there was kinda-sort if-you-look-really-closely-just-right you could see a bump to Saturday night there was definitely a just-barely-there-if-you-look-for it bump.  That's progress.  She's sitting next to me right now poking her belly trying to get Susbaby to move.  :)
Posted by Scott at 8:09 PM No comments:

She has actually gotten marginally better.  She's been going over to her parents (picked up and dropped off, she's still not driving) which gets her out of the house with other people instead of wallowing in her own misery.  Baby steps.

The pineapple chunks and orange juice month has passed.  There's an on-again, off-again crave for pickles (cliche, right?).  Lately it's mostly been M&Ms, popsicles, and Scooby snacks.
Generally what we've noticed is if she has a craving on a whim (ie, saw something on a TV commercial), it'll pass by the time I get back from the store.  If she has to wait a few days and still wants it, it's for real.  Which is why I'm SO glad she's been craving steak for over a week now.  My shopping trip Friday?  Thirty-six ounces of steak and two boxes of popsicles.  Awesome.

Shoshy's 10 year old cousin (a boy) knows she's pregnant and knows she's been sick.  He was very reluctant to give her a hug because he didn't want to catch whatever she has.  He was very skeptical that pregnancy isn't contagious and he can't get it.
Posted by Scott at 3:26 PM No comments:

I had a quite the conversation with the cashier at Walgreens as I was buying two constipation medicines and a box of Gushers.  Not as funny as the 6-pack of 5-hour energy and box of condoms purchase, but right up there.

Shoshy's started to feel a little better though.  On a scale from 1 to 10 (10 feeling the worst), she's probably had a few days in a row around an 8 or 9.  That's a vast improvement from the 14 she'd been at.  It seems (although I hate to jinx this) that pineapple and orange juice is her thing.

This is measured using a standard pain scale, not the XCD scale.  http://xkcd.com/883/

The Shoshy-wants-X-so-I-go-get-it food supply is growing.

Scott
Just a guy looking for an outlet to write. Common topics could include towels, life, working at a Big Corporation, writing software, religion, politics, grammar, Omaha and baseball.